The SCAD Museum of Art

The SCAD Museum of Art is a premier contemporary art museum that features emerging and established international artists through commissioned works and rotating exhibitions; engages local communities with special initiatives of an international scope; and serves as a resource for SCAD students and alumni during their academic careers and beyond.

As a center for cultural dialogue, the SCAD Museum of Art engages students through dynamic interdisciplinary educational experiences. A growing international roster of artists provides opportunities for students from all majors to learn about wide-ranging artistic practices and world views.

An award-winning, architectural icon, the museum incorporates the oldest surviving antebellum railroad depot in the U.S. into its striking design. Nestled in the heart of Savannah's vibrant historic downtown district, the museum attracts visitors from around the globe. It has been recognized by the Georgia Trust for Historic Preservation, the Congress for the New Urbanism, the International Interior Design Association and the Historic Savannah Foundation, and received the American Institute of Architects Honor Award for Architecture, a pinnacle achievement.

The building and its history

The SCAD Museum of Art is a radiant example of the university's legacy of innovative building adaptation and reuse. Since 1978, SCAD has revitalized more than 100 structures in Savannah and Atlanta, Georgia; Lacoste, France; and Hong Kong.

The SCAD Museum of Art is housed in an 1853 brick structure that was once a railway depot for the Central of Georgia Railway. This National Historic Landmark is the only surviving antebellum railroad complex in the U.S. The museum has breathed life into these ruins, which once extended more than 800 feet along Turner Boulevard's southern frontage.

Originally conceived as a major trade post for Savannah, the railroad complex was occupied by Union troops at the close of the Civil War. In the early 20th century, the area surrounding much of the Central of Georgia Railroad buildings emerged as an important African American commercial district and cultural hub, and remained so through the mid-20th century. Despite its prime location and significant pedigree, the complex was beset by five decades of neglect, and by the late 20th century, the depot and its precious Savannah gray brick lay in ruins. Yet, a wealth of natural beauty and possibility remained, sparking SCAD's commitment to its students and to the Savannah community at large.

Following a groundbreaking ceremony in January 2010, SCAD architects, designers and craftsmen integrated the building's history with its bright new future, analyzing and reproducing key original components down to the chemical compounds in the 19th-century mortar. The ethos of the rehabilitated SCAD Museum of Art is best articulated by its glittering atrium, an 86-foot-high steel and glass lantern featuring the first beacon that welcomes visitors and elegantly redefines the Savannah city skyline.

Salvaged bricks and original heart pine timbers appear throughout the museum, and the original high ceilings, most of which were kept, allow for optimal temperature regulation and provide a dramatic background for the display and experience of art.

The landmark rehabilitation of the SCAD Museum of Art, the largest project of its kind in SCAD history, has advanced the university's award-winning legacy of adaptive reuse and urban revitalization. The $26 million expansion added 65,000 square feet to the former museum facility, and the building now features many notable design elements including a prominent entrance marked by an 86-foot-high steel and glass lantern; a contradistinctive façade uniting original 19th-century Savannah gray brick with modern composite materials; a manicured courtyard and streetscape; outdoor lecture and performance spaces; and an events terrace and adjoining atrium. Inside, the expansion allows the museum to present engaging exhibitions and installations from renowned and emerging artists, as well as showcase works from the university's diverse permanent collection. Much of the museum's expansion has focused on art stewardship, as evidenced by dedicated areas for shipment, quarantine, framing and de-framing, and curatorial supply storage.

Since opening its doors in October 2011, the renovated museum has been celebrated for its inspired architecture and design, world-class exhibitions and visionary community outreach and education programs that enrich art enthusiasts, educators and students of all ages. SCAD is proud to be recognized by the following awards: As part of SCAD deFINE ART 2016, the Savannah College of Art and Design honored two important figures in American history. In celebration of William and Ellen Craft and their daring escape from slavery, the university commissioned and installed a commemorative bronze medallion — designed by SCAD alumnus and foundation studies professor Andrew MacDonald (M.F.A., illustration, 2014) — in the lobby of the SCAD Museum of Art.

In 1848 the Crafts, an enslaved African-American couple, escaped from their masters in Macon, Georgia, to embark on a perilous four-day journey to the Northern free states. To make their escape, they devised a plan for fair-skinned Ellen to pose as a deaf, white male slave owner and William as her attendant slave. Upon completing the first stage of their journey, the Crafts arrived in Savannah, passing through the Central of Georgia Railway depot — the very place where the SCAD Museum of Art stands today.

Dr. Walter O. Evans, a member of the Ruskin Society and benefactor of the SCAD Museum of Art's Walter O. Evans Collection of African American Art, originally shared the story of the Crafts with President Wallace during the SCAD Museum of Art's expansion in 2011. Dr. Evans added, "This acknowledgment by SCAD — recognizing the passage of the Crafts through this place that today stands as an educational and cultural junction of the highest order — is a perfect illustration of how SCAD rises to every occasion, taking care to celebrate narratives both well-known and lesser known so that we all might share in the universality of the human experience."

View the lesson plan as part of your educational experience. 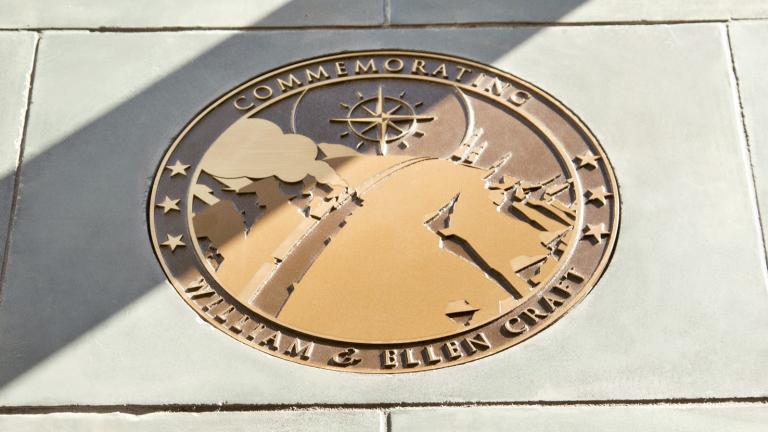 The SCAD Museum of Art boasts an ingenious use of space to give visitors and students the optimum viewing experience.